Why You Should Winterize Your Engine

Why You Should Winterize Your Engine 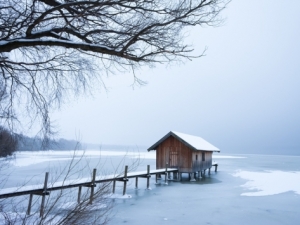 At this time of year practically every boating publication has an article about how to winterize your boat and engine for storage. It is also known as winter lay-up in some areas of the country. Most of the stories explain and illustrate a step by step process for winterizing but often do not detail what could occur if the procedures are ignored or not followed correctly.

Fuel stabilization over the several months of non-use has to be a priority. Today’s ethanol enhanced gasoline ( E-10 ) is very susceptible to moisture as it will absorb any condensation on the inside surfaces of the fuel tank that forms when large temperature changes occur. In hot weather gasoline can absorb up to 0.5% water but as it gets colder, the moisture in suspension will cause the ethanol to un-bond with the gasoline and will form an ethanol-water combination which is more corrosive than ethanol alone. This new mixture is heavier than gasoline and settles to the bottom where it proceeds to eat away at aluminum tanks starting at the welded seams. It can also strip the anodizing off the sides of the tank. Come springtime the carburetors or fuel injection system may accumulate the particles of aluminum oxide which looks likes white sludge. The same scenario happens to the gasoline inside of the engine and that affects the internal metal, plastic, and rubber parts of your motor’s fuel system.

That is only half the story; gasoline also decomposes over time and oxidizes, forming gummy deposits that can harden and smell like varnish. This is where a quality fuel stabilizer comes in; its ingredients slow the decomposition of gasoline and retard – but not prevent – the phase separation of ethanol and water. In addition, most stabilizers contain anti-corrosive additives to minimize rusting of steel parts and the freezing up of expensive electric fuel pumps.

With the popularity of 4-stroke engines over the past decade, protecting a motor with fogging oil is more important than ever because of the many steel and cast iron parts used in their construction. There are always valves open to the atmosphere where moisture in the air condenses on the finely machined metal parts during temperature changes, and causes rust and pits. Unlike the old traditional carbureted 2-strokes whose components normally have an oily residue, the 4-stroke steel and iron parts are subject to corrosion damage, more so in salt water areas. Valves, rings, and cylinder sleeves are the most prone to rust and in some motor designs, a stuck valve can be hit by a piston causing expensive damage when the engine rotates when starting. Rust buildup on the cast iron bores gets scraped away by the piston rings as the engine starts removing small bits of metal that changes the clearances between the pistons and cylinders each time it happens. Problems such as lower compression, poor idle, and/or increased oil consumption with high increases of hydrocarbon emissions are possible as cylinder and ring wear occurs. 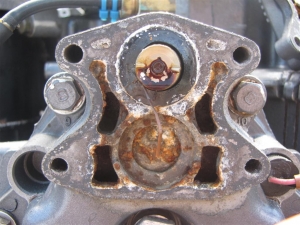 Cooling systems require a good flushing out before storage. Any salt buildup or even sand or mud deposits hold moisture which could cause galvanic corrosion inside an aluminum cylinder block in the presence of a dissimilar metal such as a brass thermostat. Often in neglected engines pitted areas in the block are visible that might eventually form pinholes, spraying water over the powerhead when they break through.