Powerboats in the Olympics? 105 Years Ago it Was!

Powerboats in the Olympics? 105 Years Ago it Was! 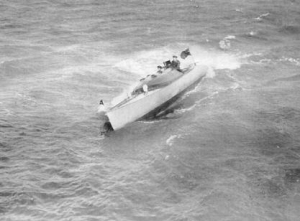 The 1908 Summer Olympics had the distinguishing characteristic of hosting the first, and last powerboat racing events in Olympic History. 3 classes were devised, an open class, an under 60-ft class and a 6.5-8 meter class (21 -26 ft). Each event was intended to run the same 8 nautical mile course for 5 laps for a total of 40 nautical miles. All three events had only one boat finish, so only gold medals were issued for all three races. Events were held on 28 August and 29 August 1908.

The next day after both other classes had finished their races, another attempt to run the race was made. Dylan did not return to race a second time. Wolseley-Siddely again started and a French boat named Camille arrived to race against it. Camille was the only non-British boat to compete in any class. During the race, Wolseley-Siddely ran aground on a mud spit and Camille crossed the finish line alone to win the gold in the open class.

The Under 60-ft class was held right after the first open race was abandoned. Aswith the open race, only two boats arrived at the starting line, Quicksilver and Gyrinus. Quicksilver abandoned the race as it was troubled by water coming over its sides. Gyrinus,which was a much smaller boat, carried an extra crewman whose job was to bail water. Gyrinus made to the finish line becoming the first Olympic Champion in Powerboat Racing.