Passing On The Tradition Of Boating

Passing On The Tradition Of Boating

As GTMM is based on a family tradition of boating, we found this article regarding passing on the passion of boating really fascinating. Check out a portion of the article below, or click here to read it in full.

Now in its 10th season, Deadliest Catch still ranks as one of my favorite TV shows. I draw parallels between the tribulations among the crews and lessons learned in my own, less-treacherous boating experiences.

A recurring drama centers on the burning desire of certain crew members — often a brother or son of the captain — for a shot at commanding the boat. Yet the alpha-dog captain stands unwilling to acquiesce.

No two individuals have typified this struggle more than the Hansen brothers — Capt. Sig and deck boss Edgar — aboard Northwestern. Few captains have clung to the helm more tenaciously than Sig, and few would-be skippers have been as persistent — or patient — as Edgar.

Yet early last season, Sig finally turned over the wheelhouse so that Edgar might pursue a blue king crab quota in the farthest reaches of the Bering Sea. Later in the year, Sig relinquished the helm again to Edgar to finish the opilio (snow) crab season.

In both cases, Sig knew he could not remain aboard Northwestern while another captain manned the helm. The urge to take over would be too much. Watching the boat pull away might be equally difficult, but it would ensure that Edgar remained in charge. 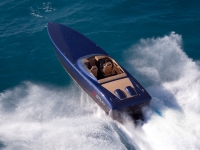 Captains in the Making
Over the years, I have found myself facing a similar dilemma when it comes to my three sons. Since they could walk, each has yearned to take the helm. While in the early years I rarely shared the wheel, as they grew older, I gradually let them pilot the boat with greater frequency. Despite my reflex to control, I also recognized important reasons to nurture the boys’ instincts.

First, if I’m incapacitated, it’s vital to have a co-pilot. This happened in reverse to me while fishing with a guide out of Key West. He was suddenly stricken and virtually immobilized by intense pain. (We learned later it was a kidney stone.) The anguished guide charged me not only with getting us back quickly, but also with securing the boat at the marina while he was rushed to a hospital. Luckily, I knew my way around a boat, as well as the tricky channels of Key West.

With age, I also know that the rigors of running the boat might someday become too much. At that stage, I will be happy to have three younger men take over… as long as they also take me.

Finally, there’s immense satisfaction in passing on knowledge you’ve gained over the years. In my case, the boys have learned through osmosis and instruction, but mostly from experience.

Learning Experience
I’ve learned too. I now realize the importance of allowing fledglings to absorb the experience of captaining. I’ve learned to resist the temptation to bark orders or wrest control when things get dicey. I’ve learned to stand by to answer questions and offer guidance, but keep my hands off the wheel, throttle, electronics and switches.

If a protégé asks how to do something, I describe how, but let him actually make it happen.