GTMM Featured In Speed On The Water Premier Issue

GTMM Featured In Speed On The Water Premier Issue 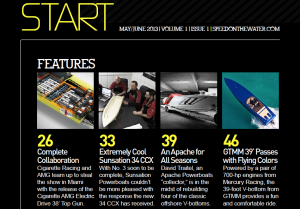 Check out a portion of the interview and article, as published by Speed On The Water, below, or check out the online magazine (article found on page 46) here!

The first time I met the founder of Giovanni Theodoli Marine Manufacturing—GTMM to keep it simple—was at the Miami International Boat Show in 2011. The son of Katrin Theodoli, owner of famed Magnum Marine, Theodoli told me about the boat company he recently started and the two boats he was planning to build under the GTMM moniker—a 27-foot sportboat and a 39-foot offshore boat.

A year later, Theodoli had a nearly complete GTMM 39 on display at the Miami Beach Convention Center, and it was one of the show-stoppers at the 2012 event. A rich blue paint job from Guardado Marine coupled with a luxurious tan interior gave the sit-down-style V-bottom a refined appearance. And while it took nearly a year to completely finish the 39-footer, the end result is a smooth-running, stylish boat that Theodoli and his business partner Scott Smith are proud of. The two have been giving demo rides to prospective customers and were kind enough to allow TNT Custom Marine’s John Tomlinson to drive the boat and provide his feedback.

Tomlinson, one of the most accomplished offshore racers in the sport’s history, said the boat’s overall appearance was first rate. From its clean rigging and simple dash layout to the gorgeous paint job and the sleek lines while it sat in the water, the GTMM 39 was “as elegant as a performance boat gets.”

Click here to view the magazine in full, and check out page 46 for the rest of the article!