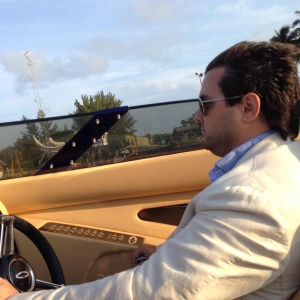 Having been born in Miami, FL, to an Italian father and a Swiss mother, Giovanni Theodoli, Gio, as he is most commonly known, grew up at his family’s boat company, Magnum Marine on the famous Thunderboat Alley. Often referred to as “Queen of Thunder Boat Road”, Theodoli’s mother, Katrin Theodoli is a dominant force in the marine industry.  Theodoli fondly remembers the days spent boating with his father, Filippo “Ted” Theodoli, both sharing a passion for the sea.  Whether it was summering in the Mediterranean on a new Magnum, or jetting to the Bahamas for the day on a Magnum 53’, the majority of the family’s free time was spent on the water.

By the time Giovanni was 10, he began spending his free time out it the factory at Magnum and began apprenticing in the electrical department. As the years went by, Theodoli moved on to the mechanical department and then on to engineering and so on.   After his schooling was completed, Giovanni returned to Miami. Eager to rejoin the industry at a professional level he returned to Magnum Marine. From 2000-2010, Theodoli oversaw quality control, customer relations, sales, and aided in the production of new models including the Magnum 51’. Since he had the opportunity to work in various positions this cemented his foundation of learning all aspects of the industry.

After several years building bigger and bigger yachts, Theodoli’s interests turned to updating and relaunching the original debut model, the Magnum 27’, finding that he has a passion to bond with the classic Magnum owner. In early 2010 Theodoli purchased and restored both a classic Magnum 16’ Missile and a Magnum 16’ Marauder and plans to restore a rare Magnum 25’. Soon after, Theodoli founded GTMM, a company concentrating on smaller high-performance boats ranging in size from 27’-39’.  Having a strong eye for quality and detail, he insists that the company focus on the creation of custom masterpieces built to the highest specification found anywhere.

In addition to a love for boating, Theodoli is fond of aviation and holds a private helicopter pilot’s license, often flying with his wife down to the Florida Key’s for lunch. Theodoli resides with his wife and children in Coconut Grove, FL.

As of August 2013, GTMM has merged with the powersports division of Magnum Marine and is now called GTMM. We are very excited with the new agreement and the opportunity to provide our customers with the best quality products in the high performance boating industry. Since 1976, Magnum Marine has been producing some of the world’s most recognized high performance boats around the world. Now, GTMM will extend that manufacturing success and provide the performance boating world with quality and state-of-the-art powerboats.